The May 2021 National Summit on Transforming the Culture of Power: Indigenous Transformative/Restorative Circle Practices on Healing and Thriving Together in Community, was and enormous success. The 352 participants analyzed, grieved, celebrated, and told their stories about what we need to do if we are to live in harmony and safety with each other based on racial, and gender equity. Black, indigenous, people of color spoke eloquently about the systemic, capitalistic structure as the root of all forms of violence. Black and indigenous families were historically traumatized through sexual trauma, selling and removal of children from their homes, slavery, residential boarding schools, and objectification on all levels of existence. The concepts of ownership through the creation of a money system ushered in unprecedented inequity and dispossession which has yet to be rectified. All agreed that building community responsiveness through transformative/restorative circle practice is key.

Who will fund VBCIC when we say that money is the First Violence? We trust that you will!

The original constitution says that only White, male, property owners could own land. Only they could vote. Only they had any money with which to own the land. All life forms became objectified in that momentous decision without their consent. That is the first violence. We see sexual and domestic violence everywhere. We see the murder of Black people by the police. We see food and economic insecurity in its stark reality amid a pandemic. We see the health disparities that reflect unvarnished racism. Voter suppression is everywhere. The historical truth telling of the Tulsa massacre to bring down Black Wall Street and the discovery of 215 children’s bodies at a Canadian boarding school tell the tale of histories that needs to be told to heal our pain. No harm can be addressed effectively without that critical understanding 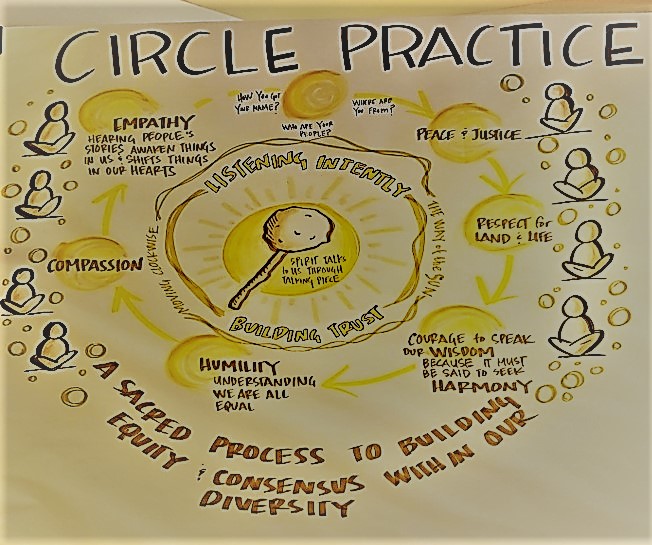 Visioning B.E.A.R. Circle Intertribal Coalition invites you to support systemic and social change through its movement building curriculum Walking in Balance with All Our Relations. This 39-hour curriculum honors the values of love, compassion, empathy, humility, wisdom sharing, connecting to the land, sacredness, honesty, courage, truth, vision questing, accountability, and courage to change – these are the necessary ingredients to build a vibrant, thriving community based on equity for all.

VBCIC needs your support to bring its nationally acclaimed curriculum to community members, to providers, and to system holders to shift the paradigm of how prevention initiatives work – through transforming ourselves, our institutions, and our systems of governance.

To prevent continued harm and transform our communities, we need tools that foster dialogues across differences and community-building circle practices to heal both those who harm, and those who are harmed.